The Roman fortress at Usk, known as Burrium, was built by the Provincial Governor, Didius Gallus, in about 55 AD as part of the strategy for pacifying the Welsh. The war-like Silures of South Wales, according to the historian Tacitus, could be “turned neither by brutality nor by clemency from pursuing war”. They had retreated to the west after heavy defeats in 51 AD so Gallus moved his 20th Legion from Kingsholm near Gloucester to Usk. 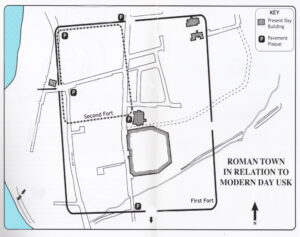 The new fortress formed an essential link in the military frontier running from Chester to the mouth of the Usk. It was built on a large scale and accommodated approximately ten thousand soldiers and their auxiliaries, far larger than the population of present day Usk. Altogether it covered nearly twenty hectares, measuring 475 metres from north to south and 410 metres from east to west. The buildings were largely of wood (hence the lack of archaeological remains) except for the bath house which was stone-built as in other forts.

The bread ovens, at the periphery, were sited well away from the timber buildings which dominated the interior of the fortress. It was surrounded by a V-shaped ditch, four metres deep, and large ramparts with watch towers at 100 Roman feet (30 metre) intervals.
Evidence of substantial officers’ houses has been found during excavations and of two large granaries holding sufficient grain to provide bread for a whole year.

The main streets were the Via Praetoria running from north to south, roughly along the line of the present Maryport Street and the Via Principalis running from east to west, part of which survives as Pook’s Lane.

The 20th Legion suffered heavy casualties helping to defeat Queen Boudicca in 60 AD and were afterwards withdrawn from Usk to replace the 14th Legion. When the Welsh were finally defeated in 74-77 AD it was decided to move the fortress from Usk to Caerleon and it was gradually demolished.  Artefacts found during excavations are now mainly in the Roman Museum at Caerleon.

The reasons for moving from Usk to Caerleon were that the river was navigable as far as Caerleon but not to Usk and that Usk was subject to frequent flooding. A second, much smaller Flavian Fort was constructed within the boundaries of the abandoned fortress, probably as a mere works depot and a basis for iron work.  The Roman presence in Usk was therefore relatively brief but there is evidence of continued occupation of the settlement up to the 4th century AD.

In Usk today the boundaries of the forts are marked by five pavement plaques.