The church dates from c. 1170 and till 1535, the dissolution of the monasteries, was part of a Benedictine nunnery which was founded by the Norman lord Richard de Clare. This was the only Benedictine nunnery in Wales. The tower and south wall of the nave are original. The north and west walls are from the Early English and Perpendicular period, late 12th C to late 13th C, later extended in the 15th and 19th C. 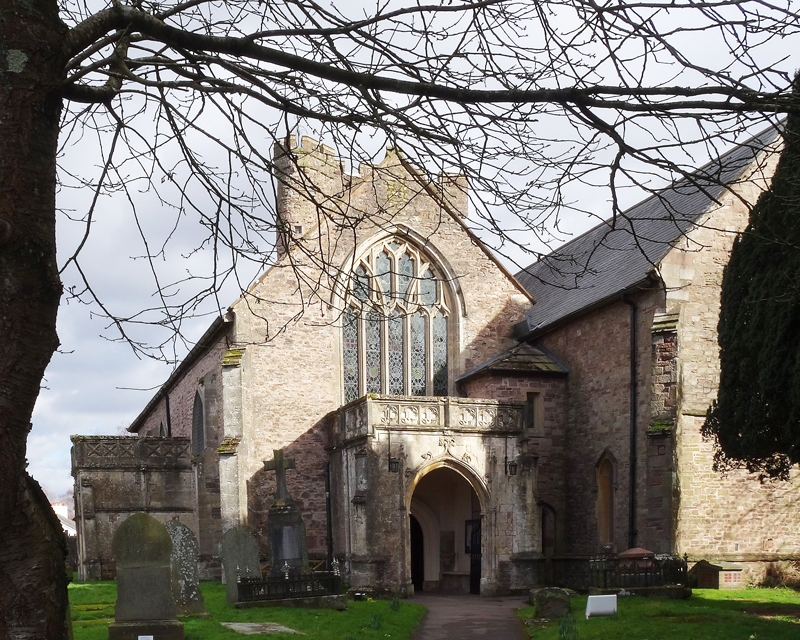 The nuns shared the church with the local community who used the north isle separated from the nuns by a screen running down the nave. The nunnery cloisters and other buildings were on the south side of the church. There were north and east and probably south  transepts which were built over remains of a Roman Fortress ditch so suffered repeated subsidence and eventual collapse or demolition.

The north and west porches were probably built before 1460 by the rich and powerful Lord William Herbert of Raglan Castle. The Priory gatehouse remains, this was built just before 1535.

The financial stability of the nunnery was poor, due to bad book keeping, fraud and non-payment of rents. Also the town was largely destroyed by raids by the forces of Owain Glyndwr in 1402 and 1405. The poor finances were largely restored by a Papal Indulgence in 1404. This was obtained by Adam Smith (1352 – 1430) who was born in Usk and became an international lawyer and priest. He is remembered by a brass plaque in the church. The church became a focus for pilgrims who could pay for indulgence of their sins and a promised shorter term in purgatory. They could also pray at the chapels of St Radegund a 6th Century Germanic princess and St Mary Magdalene. 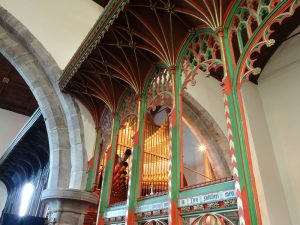 Near the west door is a memorial to St David Lewis of Abergavenny, ordained in Rome in 1642 and canonised in 1970.  He was well known in Monmouthshire which still contained many practising Catholics. He was eventually arrested, tried in Monmouth and condemned to death and executed in 1679 opposite the Usk Catholic Church.

The church contains a magnificent 15th Century carved screen, a 12th-century font and a church organ with some of its of its pipes projecting out horizontal.  The organ was originally built in 1861 for Llandaff Cathedral and was moved to St Mary’s in 1900.  It is believed to be the most complete Victorian cathedral organ in the UK. 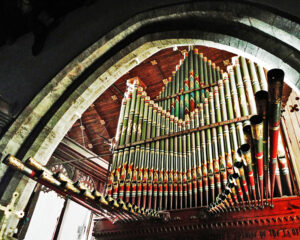 the “The Medieval Priory and its Community” by M. Gray and S. Rees in “Usk Castle, Priory and Town” ed. by J. Knight and A. Johnson.