It is likely that from 1066 and the Norman invasion there was a small wooden castle in Usk on the site of the current castle. A small settlement would have developed round this castle. However, Richard “Strongbow” de Clare, the local Marcher Lord, created a new planned town which was constructed along with the Priory of nuns, the church of St Mary and a new stone keep for the castle. This would be between 1154 and 1170. As well as laying out the streets and building plots, a defensive ditch was built round the town.

Rectangular building plots and roads were laid out, centred around the main centre and market at Twyn Square. All plots were let at the same annual rent of one shilling and those taking the plots had to build on them within a certain time. The properties were narrower nearer the market square which would be the best trading location and wider further out in the town. The modern town, with medieval and later extensions, still matches this plan. 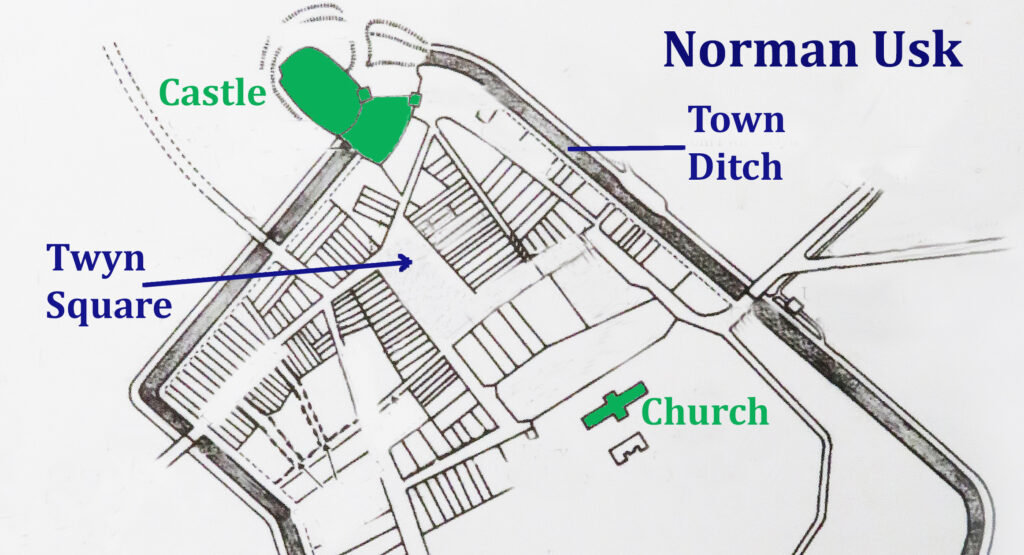 Adapted from a  G. Mein map.

All of the properties on the North East side of Twyn Square are multiples of the original narrow width as later owners bought adjoining plots plus the narrow passageway between. The butcher’s shop doorway is on the line of one of these passageways. A blocked stair window in the south wall of what is now a flower shop shows that there was once a passageway behind this wall.

The new market town was created to generate funds for the Marcher Lord. Trade was attracted to the town centre by routing main roads though Twyn Square. The native Welsh people could not buy and sell or barter except in the town market. All transactions and other activities would be taxed or pay rent. initially the new town was populated by tenants from the de Clare English estates.